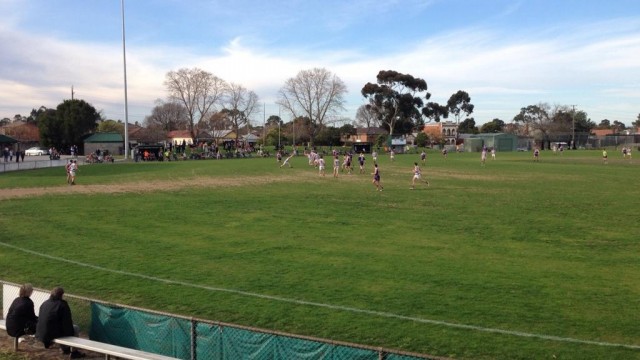 It was an ill wind that blew no good for NOBSPC at Bill Lawry Oval on Sunday as we were knocked out of the finals race by Old Geelong by 24 points.

There could be no question about our effort or commitment but truth be told we butchered the ball all day, especially by foot going inside 50. A strong northerly that blew across the ground played havoc with the kicking of both teams, but credit must also go to OG for the pressure they applied to our ball carriers, which was a real factor in our missed chances and turnovers.

The match started with us having plenty of the play but OG was more efficient as they kicked the first two goals from limited entries. We then levelled the scores through Chapman, but unfortunately that would prove as close as we got for the rest of the game and the deficit at quarter time was 10 points.

The start of the second term was played in our 50 but only could snag one major before OG kicked two of their own against the run of play. We responded quickly enough with another but then followed a half hour of play either side of half time in which neither side could kick a goal, with innumerable chances missed, including at least half a dozen of our own which failed to score at all. It was OG who emerged from this arm wrestle in the ascendancy with two goals to build their lead to 27 points before we embarked on a comeback that saw us reduce the margin to 8 points at the 14 minute mark of the final quarter.

Critically, after we had missed two very gettable chances, OG capitalized on our turnovers twice in a minute to take the margin back to 20 points, which proved to be a bridge too far.

Our standout players were at either end with Nick Holt in defence and Matt Chapman in attack (five goals). Peter Shepherd was tireless in the ruck against close checking opponents, while midfielders Jeremy Nettlefold, Adam Oakley and Dan Tonkin were hard at it all day.

In the end, the loss of class onballers Byrne and Clarkson proved hard to cover and we were shown up for a lack of pace.

So ends a season in which our best football was good enough to beat anyone in the competition, but which we found hard to produce consistently. Hopefully we can keep this group together so they can find that consistency in 2015. Thanks to all the players for their effort this year.