Last Friday night we crowned three new champions at the club’s 2018 presentation night held at our wonderful sponsor the Victoria Hotel. It was great to have over 130 there on the night ranging from players and their partners to the parents of the under 19’s as well as life members and sponsors. In what was an exciting count three new champions were awarded with the club’s best and fairest medals.

Congratulations to Nick Burgin, Felicity Smith and Will McKenzie for taking out the senior men, senior women and under 19 best and fairest awards.

Congratulations also to Eliza Cole and Michael Rapa for taking out the reserves best and fairest’s for the women and men.

For Burgin and Smith, it was a year that they both put their talents on show regularly throughout the year, with both of them winning their respective awards by comfortable margins. They were both also selected in the VAFA Big V squads as a sign of their form.

As a new recruit to the club this year, Nick Burgin made such an impression on new coach Anthony Palmer that he was named in the leadership group as Vice-Captain. Coming over with a bunch of friends from St. Bernard’s his skill and strength around stoppages was evident early. For those who check the results regularly you would have seen Burgin in the best for a lot of the games this year, and as the club hands out some of Young Henry’s finest as a best on ground award for home games, Nick joked that he was paying his Dad in beer instead of rent. A humble winner, Nick thanked his family and friends for all their support, but spoke about how Brunswick is now being seen around the traps as a destination club for its culture and inclusiveness and that with new recruits looking to move across he has a strong desire for club success both on and off the field.

For Smith it was a culmination of hard work and years of dreaming about playing football but having no avenues growing up, and in her acceptance speech she thanked the club and Renegades specifically for re-igniting her passion for the sport. Flick dedicated her award to her 10 year old self; a young girl who kicked the footy with her brothers and slept with the footy under her arm but never got the opportunity to play footy growing up. Felicity was also awarded the Renegades Players’ player; an award given by her peers for who they deemed the most influential player throughout 2018. Also part of the club’s committee, Felicity is an integral part of the club as a whole and a well-deserved winner of the Best and Fairest for 2018.

For the first time in 10 years, the club has an under 19’s Best and Fairest in William McKenzie. Will has been part of the Brunswick Junior Football Club since inception and has transferred across to the senior club after many years running water and doing statistics for the seniors when playing juniors. In a tight contest all year, Will claimed top spot from fellow BJFC alumni Gus Coverdale in the last round to take out the award. A ruckman in the 19’s, Will also pushed his way into the reserves as a forward, then having impressed in both the 19’s and the reserves, gained senior selection in which he held his position for a few weeks before heading back to help out an undermanned 19’s. With a solid preseason under his belt, Will can potentially play a major role next year in the senior ranks, and hopefully for years to come.

Jess is an individual that has given a tremendous amount of her time this year and for many previous years ensuring that the club runs efficiently, especially on game days across both Renegades and NOBS. She is a dedicated committee member showing great leadership in creating a culture that is aligned with our club values and is a very caring individual who always wants to know how you are, showing a genuine interest for all members of the club.

Jess has also been recognised more recently not just by us by also by the Brunswick Junior Football Club who have nominated her for a community award within the Essendon Football Club Woman of the Year awards, recognising her hard work and dedication this season for both the women’s and girls’ teams saying that she’s been “instrumental in improving the player experience”.

Football, fun and friendship are the mantra by which Jess lives by, whether it be coordinating teams and volunteers, writing community grants or manning the bar!

A more than worthy winner of the best club person award for 2018. Congratulations Jess.

A huge congratulations to all of the award winners on the night in what was a great celebration of the one club’s achievements this year. 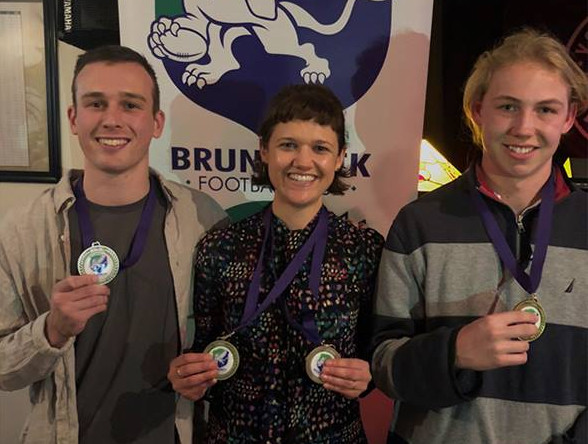