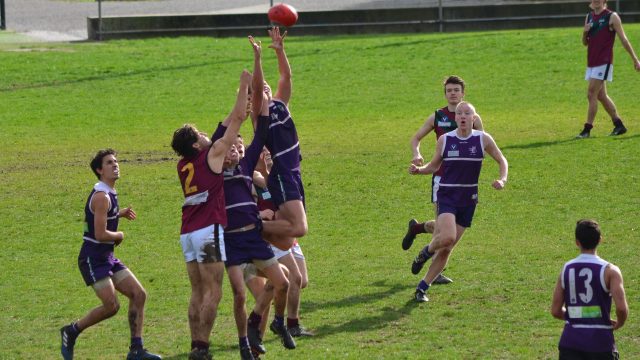 A damp and sticky Gillon Oval greeted both sides for Round 9 which was going to be a hit out against another top 4 team. The form against the top 4 has been very good with a narrow loss to De La Salle (2nd – 10 points) and nothing in it at 3/4 time against Peninsula (top), with Melbourne High (5th) on equal points with Williamstown (4th).

Some big outs with Gus Coverdale still recovering from the ankle, after kicking 8 goals against Latrobe, with Jack Ludeman confined to an exam room at 9.00am start on a Saturday morning. Go figure!

First Quarter: Melbourne High dominated the play but were held out from scoring with the backline resolute, with tough “one on one” contests through Jasper Paevere, Jack Sabatino and Declan Sparrow. Although most of first quarter was in the Melbourne High forward line Brunswick still managed to provide some attacking play. It took the High 15 minutes to register their first goal and then five minutes later Brunswick replied with a goal to Mathias Foley. Melbourne High replied at the 20 minutes mark and then another just before the end of the quarter. As the times between scores suggest, this was a slog all over the ground and the number of stoppages (6) and boundary throw-ins (9) identified hard, contested football. The fitness of the Ruck, Ruck Rover and Rover positions was going to be tested. After the first quarter the importance of winning the ball at these contests was going to be important, given the projected statistics would be over 50 stoppages/boundary for the game!

Second quarter and the same theme continued with both sides not giving a quarter. Melbourne High scored within the first 5 minutes but were held out for the rest of the quarter. The backline of Paevere, Sparrow, Sabatino with Eric Newgreen and Carl Marchione in support were repelling the High attack and limited the opposition to 2 points for the remainder of the quarter. Brunswick in reply kicked an inaccurate 1-4 with a goal to Tahj Haddock, floating down from the wing. The mosquito fleet of the two Anthony’s (Roussos) and new player Alexandris (from Donta Stars) were in everything and there disposal in these heavy conditions was excellent. Boundary throw-ins 10 – stoppages 7.

Third quarter and the same relentless slog continued, without either side taking advantage. The taller High team adjusted well to the conditions, whilst the smaller on ballers for Brunswick such as Shannon Gill, Paddy Boreham Delaney + the “Anthony’s” kept the purple and white in the contest. Scores were limited to a single goal from Anthony Alexandris with Melbourne High restricted to 4 behinds. Again the boundary line was both teams friend with 15 throw ins & stoppages 9!

Final quarter and could the home side get up? No wind, no advantage at either end, it was going to come down to will! (No, not Will McKenzie). Brunswick dominated the quarter with the repeated entries into the forward line which Melbourne High repelled. Brunswick must have had the ball in the forwarding for half the quarter and then all of a sudden big Toby Neale stole the ball out of a contest and kicked truly, one point up! Melbourne High were not to be denied and a win out of the centre saw a major score on the board. Brunswick replied albeit with another 3 behinds and then at the final minute Melbourne High were able to break free out of the backline.

A long kick out of defence and to their Centre half forward, and on the run pursed by Eric Newgreen he was forced to kick a reverse punt that tumbled and tumbled from 40 metres out to score the final goal. Although not winning the team desire and approach was excellent and illustrates some good signs to win more games throughout the year.

For Stan the Statisticians out there: Boundary throw-ins 46 & stoppages 28 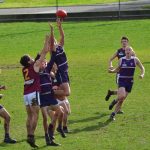