The milestone month of August continues!

Congratulations Cookie for the wonderful achievement of 150 games for the football club. We’re sometimes a simple bunch at football clubs – a pastry chef who somewhat smells of cookie dough after work = Cookie. This has certainly confused many when they have referred to you as Kyle Cook!

Part of the 2006 under 19 team before moving into the seniors you are forever one with the X factor, having excited crowds and teammates alike with you innate ability to kick the impossible and miss the simple goal. You have kicked 289 goals in your 149 games which is a great conversion rate but I think if they counted points they would be more like 350+! Just a few weeks ago you managed to snag 6 goals, and 7 points! You sometimes fly under the radar and I think kicking goals is expected of you and your amazing performances are sometimes missed; one of the best examples of this was when I asked you after a game if you’d kicked 2 or 3 and you replied 9! I didn’t think you had even had that many kicks and you hadn’t; 9 goals from 11 kicks! I will also forever remember the game at Whitefriars where in the last round we needed a win to avoid relegation and were struggling at halftime. Enter your good self who proceeded to kick 7 to save the day and keep us in Division one. Fair to say the bus ride home on that day was a memorable one!

I don’t know if there would be anyone at the club, past or present, who would have a bad word to say about you mate. You are genuinely interested in people and will talk to anyone about absolutely anything. You’re also cheeky in that if some of your good mates such as Armo, Milky or myself haven’t been present for when you have had a blinder, footy or cricket, we never need to look it up in the results the next day as you like to call us and say “hi mate, how’s it going, what are you up to, I kicked 7 today”. You also don’t save your chat for your teammates either; often you are seen chatting away to your opponent and asking them how’s the year going, what are you up to later after the game. Unless of course they try and be smart with a reference to your red hair and your need to wear a long sleeved jumper all year round – usually met with “ooh a red head joke, try something original dickhead!”

You are always up for a good time and we’ve had plenty over the years. Your love of a good time is up there with King and Sleep’s and through mainly your cricket you are still getting invited to 21st birthday’s such is your reputation of being a good fun bloke to be around. Thank you (and Hosko) for introducing me to the Bonwah (gin, solo and a dash of raspberry cordial for the players at home), and for genuinely being a great mate. Somehow you still work those ungodly pastry chef hours including 5 hours work from 3am on a Saturday morning before footy and have somehow run a household for you and your sisters as well. A talented cricketer who captains a district/premier team and has travelled overseas to play, we sometimes haven’t seen you at the club as much as you or we would like but whenever we have you in the long sleeved number 9 we love having you on board.

Having missed the flags years through travelling for cricket I know you want to be a premiership player at this great club and hopefully this year is our year. Bonwah’s will be on me if it is.

**Kyle’s Grandmother who he lived with for many years sadly passed on Monday and the senior teams will be wearing black arm bands this weekend in her honour. Condolences to you and your family. JB 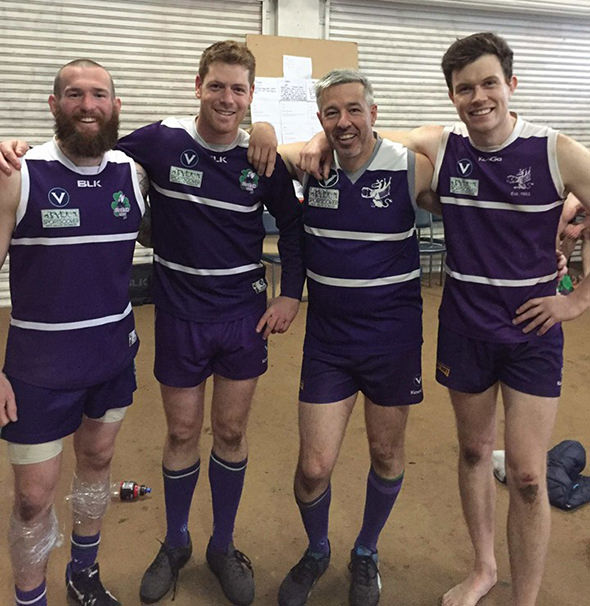