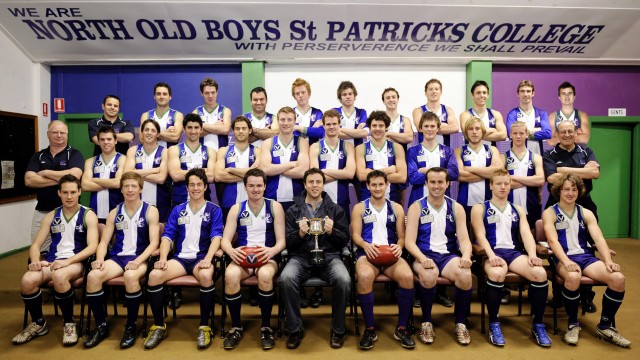 Led by Coach John Rush and Captain Brendan Sheehan, the NOBSPC reserves won the 2008 premiership in fine style with a victory over Old Geelong, the club’s first flag since the u/19 triumph in 1995, and the first one for the twos since the A-Reserve flag of 1994.

Flag for The Juggernaut

The NOBSPC reserves (hereby referred to as the “Juggernaut” ™ have claimed the D1 premiership with a comprehensive 38 point victory over Old Geelong at Central Reserve.

The Juggernaut were the underdogs going into the game after having being smashed by the Oggers in the semi final, where they boys in blue and white dominated around the packs and didn’t give the Juggernaut a sniff in the wet and boggy conditions. We were embarrassed and learnt plenty from that day.

Thankfully grand final day brought with it conditions that were perfect and enabled us to run, run, run. And with the likes of Tom Alsop and Josh Hunter winning the hard ball, runners such as Chris “Doreimus” Horsley and Phil “Victa” Doolan had a field day as the Juggernaut opened up the game on the wide expanses of Central Reserve.

The Juggernauts inaccuracy gave Old Geelong the quarter time lead, but the COBBERs hit the front in the second term and from there were never headed. The lead began to stretch out in the third term, out to a nearly match winning 15 points at 3/4 time.

The on-ballers and backline continued to hold firm and pump the ball forward, as nothing was getting past a tight back six led by Brendan Sheehan, and then two early goals in the final term sealed the result which allowed the boys (and the horde of fans behind the goals) to relax and enjoy the last half of the term knowing it was in the bag.

All in all an amazing effort to defeat a quality side who’d beaten us by six goals just a fortnight earlier. Great planning by the coaching staff, and a fantastic effort by the boys, stepping up to put in the best effort for the year on the right day. 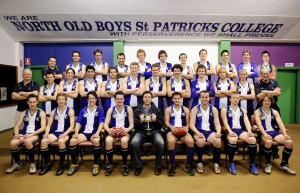 It was eight long years ago that the Juggernaut made its celebrated beginning, courtesy of the famous 14 game winning streak and the Devine/Robinson PR Machine. For the next few years they were a formidable unit, but couldn’t take the final step to a premiership. Then, nearly a decade later at Central Reserve and with the faces having changed but the camaraderie and spirit still the same, finally, the NOBSPC reserves took home the flag they’d threatened to for so long.

Conditions were perfect at Nodders home ground. The sun was out (not raining at Mazenod?!?!?), only the gentlest of breezes and a ground in fantastic condition. Plus we had the luxury of the home rooms. Old Geelong won the toss and kicked to the Waverley Rd (North) end.

It was Tom Alsop (modern day Jon Barlow) who set the tone for the day in the first contest, when after the centre bounce he without fear he dived headlong over the ball to prevent an Oggers clearance. Sloppy made a statement and the team followed. Winning the contested ball was imperative, as we knew we had the edge on them in run, so all we needed to do was have the hard nuts like Alsop, co-captain Josh “Hardball Get” Hunter and Chris “Spud” Le Maitre (Tim Roache) to farm it out to the runners like Chris Horsley (Sam Butcher), David Stribley and Phil Doolan (Josh Cassell).

Following Sloppy’s example we were having the better of the clearances in the first term, but continually wasted the chances. Chris Punton (Tim Kennedy) had the 50m arc to himself, and took a number of big grabs, but after being in unbelievable touch in front of the sticks at training on Thursday night he missed three, before slotting one late in the term. Add to that a Chris “Doreimus” Horsley miss on the run and a snap that went through but was called touched off the boot and you have 1.5 for the term. Wasteful.

Luckily the ever reliable back six, led by Brendan Sheehan gave little away when Old Geelong went forward. Sheehan was shutting down the dangerous Leslie and with Chris Stribley, sticky fingers Dave Ronan (as always moved to the backline!) & Michael Carney dominating the air, the likes of Tom Reilly (Jack Daniels), Jack Nihill & everyone’s favourite pest Joel Scanlon (Kim Hildebrandt) mopped up and ran the ball out the other side with pace and precision.

Right on quarter time was another gutsy effort by a North player, as ruckman Kelvin Grace (Brendan Devine) backed back into a pack, copping a big hit, but got up and shook it off. It showed the commitment required, and like Sloppy another precedent had been set for the day.

We were down by 3 points, happy with our work-rate but not conversion.

In the second term we again had the better of play without making them pay on the scoreboard, despite the efforts of the like of Joseph van Dyk who was his usual lively self across half-forward and presented all day. Our pressure on the Oggers when they had the ball was tremendous, and it was fantastic to see the likes of Jem Newland and Ryan Veal coming off the bench and laying tackles and smothers straight away. It was 22 even contributors all day long.

Goals for the quarter were kicked by Jarryd Browne on the run after good pressure by the forwards forced a turnover, and then Damien Joyce after getting a holding the ball decision against former North player Nick Sanders. These goals put us in front at half time by 5 points, with the feeling we were about to break the game open with our continual run.

And that’s what happened in the third term, as our persistent play-on style and run and carry game started to take it’s toll on the Ogs. It started from the backline with the Stribleys, Nihill and Reilly all moving the ball quickly and into space. Up forward Punton continued to thrill, with a big pack mark bringing the house down. Then goal sneak Jason Weidner (Scooby Howard) got in on the act and dribbled one through, Browney nailed one from a set shot and it was the mercurial Punts who broke the game open when he kicked a couple to open up a 15 point lead at three quarter time. Their heads were dropping, we were winning in the ruck with the tandem of Kelvin Grace and Jamie Fisher-an the occasional cameo from the versatile JVD- giving our boys first use.

We were up and about; the mood at the huddle was one of restrained excitement. We could sense we all but had it, but had to stay focused as they were too good a side to give a sniff.

But they never had a chance. The backline was running forward in waves now, Brendan Sheehan was showing off the results of speedball work and shrugging tackles, Dave Ronan was impassable at CHB showing he’s got the best hands in the business, Chris Stribley defied his baggy shorts to finish off yet another brilliant finals game, Jack Nihill ran and hit targets with his precise delivery, Joel Scanlon was playing so close to his man like it was the Q-Ball, Jem Newland was taking big grabs and Michael Carney coolly out marked his opponent again. They were on song.
The mids were really started to carve it up by this stage. Horsley was up to his 35th possession at this point, Doolan was still strong overhead and linking play through the middle, Reilly was playing like a man possessed, Spud Regal, Hunts and Sloppy were still ferocious around the packs whilst Dave Stribley and Browney were again breaking the lines and creating the play. To a man they played their role to perfection.

Then Joyce took a mark on the 45m arc and was held up by his opponent as he pushed back off the mark. The resultant 25m penalty made for an easy goal, and out to a four goal lead. Soon after a shot from 50m which was marked on the goal line by Old Geelong. But the OGs player remonstrated with Weidner after taking the grab and pushed him in the face. The umpired paid the free kick, Weids kicked the goal from 2m out and the margin was out to five goals and it was at this point that the game was over. It was bedlam in the massive group of senior players behind the goals.

As the game played out we continued to have all the play, never stopping running. Then Joyce kicked another after a free kick for too high as he roved the ball off a boundary throw-in. Party time was in full swing. Jem Newland got a 25m and shot on goal as they got frustrated knowing the game was over, a Horsley snap just missed then Ryan Veal just missed a shot after intercepting a kick out. We were queuing up to try and kick them.

The final goal to North was after Joyce roved the ball at the back of a pack on half forward (forwards instinct), ignored the runners streaming past him for the hands (personal glory time) and did a big u-turn and from 40m drilled the goal and then carried on with some very self-indulgent celebrations as he did what could best be described as a poor mans Riverdance whilst lumbering around the forward line, complete with a bellowing scream.

When the siren went the flag was ours by in the end a comfortable 38 points. Drought over.

™ Brendan Devine & Mark Robinson. Originated in season 2000 when the side won 14 consecutive games.