Where did you grow up?
Canberra.

Do you have a nickname and why?
Goodsey/Goodes – It’s my last name.

What has been your greatest sporting achievement?
Representing the ACT in Soccer.

Best personal on ground highlight in a Renegade game?
An awesome textbook tackle on an opposition player this season, It was textbook. And felt so good.

Have you had any major injuries?
Not playing footy! But I tore my groin in a dance competition and it’s never been the same.

What position do you play?
Midfield.

AFL/AFLW team?
Was the Sydney Swans but I think I’m being converted to Collingwood. They are an entertaining team to watch.

Best thing about playing for Brunswick?
The players, such a fun bunch of legends.

Best Renegades player seen on the field at Brunswick?
Too hard to tell, they are all great.

Best Renegades player seen off the field at Brunswick?
Probably Flicka, but to be honest, everyone is great. I love spending time with the team.

Professional career and current location?
International and Professional Bodies Manager in the Government. And actor!

Do you have a pre-game ritual?
I have to pee a lot! But I also need to have some Powerade and a little stretch.

Fave tune to get pumped up to before the game?
This is pretty lame, but pumped up musical theatre songs. Like the greatest showman hahah. 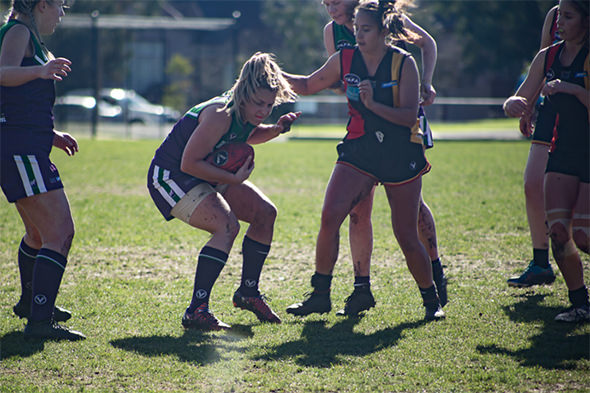 Goodsey in action for the Renegades