Congratulations Kingy for the wonderful achievement of 200 games for the football club. To say you are the heart and soul of the men’s playing group is an understatement and your leadership across many years has been revered both on and off the field.

A plumber from Preston, you started in 2006 in the under 19’s before transitioning to the reserves where we were premiership teammates in your first two years before you leapt past me and have played seniors for quite a while now.

I know that you won’t mind me saying that you have changed a lot of the years especially with your physical appearance. For many years you were the loud and slightly chubby back pocket in those two’s premierships all those years ago, dour and tough but seemingly content with your position. From there though the evolution of your body and your fitness changed dramatically to a point that you were no longer that dour defender but a senior footballer with a strong work ethic and talent. You’ve always had the respect of the playing group but after that preseason where you dropped all that weight the respect was even more abundant. You also have had the respect of all your coaches with many I have spoken to telling me how easy you are to coach and how much you buy into the clubs direction. All of this is highlighted by the 4 coaches and 1 most determined awards you’ve received over the years.

You have had the vocal presence and leadership qualities for all of your time at the club and from what I believe you are the only person to have captained the under 19’s, the reserves and now as senior club captain. You galvanised the group especially last year when the young playing group was in the relegation zone and you are a big contributing factor to the strong player retention from this year to last as well as helping attract new talent to the club. You are all in with your leadership style and won’t ask a teammate to do anything you wouldn’t do yourself.

You’re also an absolute character off the field and have been known to lead many soirees over the years. Many of your best on’s have been on the field but a lot more have been off it. Many a times when filling out player surveys the “best player off field’ was a close run race between yourself and Sleepy and is well earned. You often taken young players under your wing and show them the value of a good time and spend lots of time helping in building the one club culture.

You are also known as the man with all of the tatts and the big beard. Full back Tiger, full sleeve, full leg coming along and god knows how many more. You may look scary with your tiger tattoos and your bushranger beard but those who know you know how much of a caring person you really are. It was only last week that an opposition club president mentioned to me that “he’s a raging bull at the contest with a scary attack on the footy but then when the contest is over he’ll help the opposition up and give him a tap on the bum as in you’ll be right cobber, after nearly ripping his head off”.

Kingy mate, we love having you and your family at the club. You bring Tracy and your family and friends to all club functions and you truly are a great clubman. I know you wanted little fanfare for this milestone but all that you get is well deserved. Knowing you, I know you’ll give every last ounce of energy to continue to make the club successful and we hope to add premiership captain to that extensive footy resume of yours.

Good luck and congratulations on 200 games. 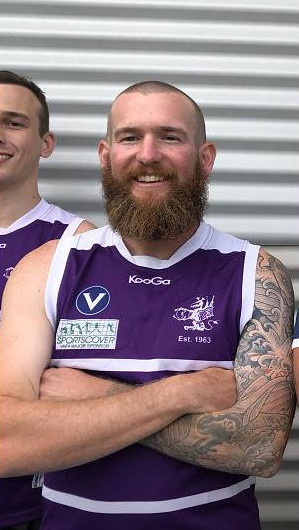 Congrats to Micky Rapa on 150 club games. A multiple best and fairest winner your skill and ability to win the ball on the field is first rate and you’ve proved to be a great asset to the twos for many a years (we won’t mention 2010!).

A Northern Saints product you came down at the end of the 2006 season for under 19’s and have played in every grade possible from that point on, including that one weekend where you played clubbies on a Friday night and backed it up the next morning with the twos. You played in the 2009 reserves premiership team and I can safely say you were a favourite of Coach John Rush – see the embrace photo below of the final siren moment – sans shirt of course! Your around the corner snaps and constant ability to find the ball have made you a vote catcher and again this year you should be high in the best and fairest race for the twos.

Often seen as an enigma around the club you are a dependable bloke in more ways than one. Early in the year with no preseason (apart for F45) under your belt we can lock you in to having an eye catching run through the midfield and then blowing up and needing a 5 minute rest. We can also lock you in to have days where you have more taps of the ball than actual touches – a Rapa special that ability to continually tap it out in front of you until it bounces just right! We know that you will rock up to most games in jean shorts and wear your Italian Stallion and hat backwards set up for the training nights where it’s just warm enough to show off your guns! We know also that your love for the mighty Bombers will never cease and you will always choose Bourbon over beer. And you are forever proud of your high Uber driving rating! As I said, we can always depend on you Rap!

You’ve regularly admitted to me that you think you’ve got many more years of footy left in you and we can only hope mate. We hope that you push towards the finals this year and if lucky enough we hope to join you in that famous sans shirt after siren celebration!

Good luck and congratulations on 150 games. 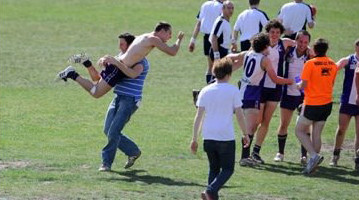