Niamh Moynihan pulled on the boots for the Renegades in 2016 and has been consistent in her great form on and off the field since. A beautiful kick with footy smarts and great composure, you’ll find “Pup” working up the wing or on the ball and getting involved with goal celebrations (enjoying a cheeky few herself). Niamh plays her 50th career game this weekend against Yarra Old Grammarians. Get down to Gillon to help celebrate this milestone.

Where did you grow up?
Just outside the “rat” in a little place called Ross Creek.

Do you have a nickname and why?
I have about 372 nicknames thanks to my parents who gave me an Irish name that is not phonetically spelt. My Renegades nickname is ‘Pup’ which is a legacy from my very short-lived (one season to be precise) Melbourne Uni football careers as I was the second youngest player and super keen.

Where did you go to School?
I went to Loreto College in Ballarat which had a football team. One of my biggest achievements in high-school was making in the team in year 7 as most players were in year 10 and above.

Best personal on ground highlight in a Renegade game?
In our game against South Melbourne in the passage of play where Kelly was on her knees in the centre and managed to give me an out back hand ball, I ran a few metres before slamming the ball onto my boot and Goose picked up the ball dodging the defenders and kicked a goal.

Have you had any major injuries?
Not really, more like injuries associated with old age and overuse i.e. plantar fasciitis.

What position do you play?
On the ball, wing or half forward.

AFL/AFLW team?
Collingwood for both.

Favourite player in the AFL/AFLW?
Jordan De Goey for the sheer excitement he can create.

Best thing about playing for Brunswick?
Definitely the social activities and the mates I’ve made. Plus meeting my favourite person Palombi who I would not have met otherwise.

Best Renegades player seen on the field at Brunswick?
Woodhouse – crashing through the pack.

Best Renegades player seen off the field at Brunswick?
Woodhouse – smashing through the drinks.

Professional career?
I’m an Associate at a community engagement consultancy. We design processes to give people a say on decisions that may impact them. I typically work on government projects for transport infrastructure and urban planning.

Do you have a pre-game ritual?
Porridge and renebabes playlist. I’ve also had to add in some warm-up work with the spiky ball and those stretchy bands to prevent more old age injuries.

Fave tune to get pumped up to before the game?
Jump Around – brings back good memories of watching Mrs Doubtfire and dancing in da club. 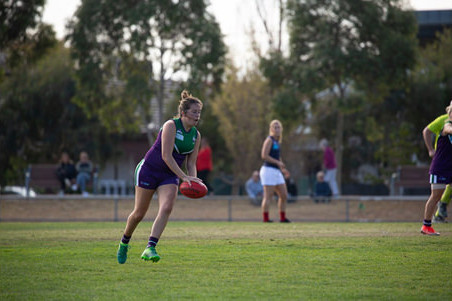 Round 2: Brunswick Renegades (72) vs Old Melburnians (1), Pup pumps the ball inside the Renegades forward 50.